Hi, my name is George E. Franklin, III, and I am a kidney transplant recipient! My kidney disease was discovered just after my high school graduation, in 1972. Though I had the grades to go to college, I really wanted to enlist in the Navy. Several of my high school friends were all going in together after our last “free summer”. They enlisted and departed in September, but I was holding back till October so I could attend my only sister’s wedding. Well, I became ill with a very bad cold, and upon going to the hospital, I was told my kidneys had shut down completely, and my blood pressure was out of control! They administered as much care as they could, being a small neighborhood care unit, and once I was stabilized, I was transferred to the George Washington University Hospital.

There I received peritoneal dialysis in an effort to “restart” my kidneys. That failed. And then the tests were coming in indicating a much more serious situation. It was called glomerulonephritis! Hemo-dialysis was then started, and that went on for 3 years, 3 days a week, six hours each day. I had, in those three years, 9 surgical procedures, including a transplant that never worked. It was removed a month later, and a serious depression set in. I thank God for my family and the Doctors and nurses at GWU! They were a caring bunch of folks! Drs Parrish, Kramer and Thompson were pioneers at GWU, and they were the best Doctors you could hope for!

Well, I was called in for another transplant, 6 months later, in November of 1975. I almost didn’t accept the second transplant, because I was still suffering from depression due to the first one not working. But my surgeon, Dr. Glenn W. Geelhoed http://home.gwu.edu/~gwg told me, George, this is YOUR KIDNEY!

Eventually I believed him, and I’m still peeing up a storm!

A couple years after the transplant, I started working in the computer field, and continued for about 20 years. I am now retired on disability due to heart disease. I’ve had open-heart surgery to repair an aortic aneurysm, and to replace my aortic valve with a St. Jude valve. And LIFE IS GRAND!

I thank my Lord and Savior Jesus for His many blessings in my life!

And thank YOU, Dr. Glenn W. Geelhoed, for convincing me it WAS my kidney!

And thank you to the Donor Family that I never got a chance to meet. Thank you! 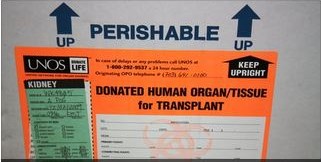